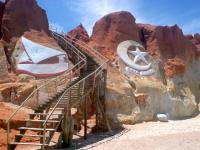 A friend and his wife are travelling in the North East of Brazil and it was a too good of an opportunity to miss out on… especially since we barely see each other while both living in London.
A rough itinerary had been decided on as meeting up in Fortaleza, taking a bus to Canoa Quebrada, stay there for a few days, continue with overnight bus to Natal and finally by local bus to Praia da Pipa.
Stay there a few days and then sadly part; me heading back to Natal to catch a flight back to Sao Paulo and my friends continuing for another 2 weeks and a packed schedule.
It was an early start (5 am) and as the plane was taking off from Sao Paulo I realised that I had left the camera battery charging back home. That was quite devastating as I was expecting the beaches, architecture and people in North East Brazil to make for some stunning photography.
Instead I would be lugging on a very expensive paper weight for the entire trip. Oh well, the old trusty 3.2 MP SonyEricsson K800i would have to do.
At the airport in Fortaleza I headed for the tourist information with faint hopes of being able to locate a Nikon D200 battery (and charger). After all, Fortaleza is a 3 million city.
I was met by a drunk person sporting a massive cowboy hat with silver stars all around and pushed down into his face.
He was calling himself the ambassador of North East Brazil and was very keen on helping me out.
The man started calling a few shops and not giving them a rest until they at least gave him another number to try. His reasoning was that I had travelled all the way from Switzerland (confusing Sweden and Switzerland is quite common here in Brazil) to take photos of beautiful Brazil and the shop staff was preventing me from this by not summoning a replacement battery.
After 2 hours somebody knew somebody who knew a guy who imported electronics on the side (unofficially?). Unfortunately the price for the battery and charger were close to what I had paid for the return flight so I had to politely decline… and bid farewell to my drunk and cowboy hat wearing ambassador.
My friends had arrived and we opted for a swift taxi to the bus station where we were able to locate the next bus to Canoa Quebrada. We even had time to get some Brazilian refreshments and catch up on old times.
The bus to Aracati took around 3 hours and costed R$13. Then it was a further 30 minutes to Canoa Quebrada for a cost of R$2.
It was late afternoon when we arrived and we decided to visit a few pousadas (guest houses) to check prices and the level of “comfiness”.
In hindsight it would have been smarter to leave one person behind with the luggage but instead we were walking up and down the streets with all of our possessions to the amusement of the locals.
In the end we decide on Oasis do Rei where they were charging R$45 for a simple room with a ventilator and R$95 for a spacious double with aircon and balcony. Lovely breakfast included as always in Brazilian pousadas.
Most of the beaches in Canoa Quebrada are backed by pink steep cliffs and you will find very little vegetation. This makes for a unique beach experience that Canoa is famous for.
Everything in the village revolves around a single street (the broadway) and you can count all the restaurants and bars on three hands.
The Cavern quickly became our favourite evening caipirinha spot and the newly opened (15 days old) churrascaria Canoa Mix was great value at R$18.50 and free grappa after dinner.
The plan was to continue to Natal and Praia da Pipa by a 6 hour overnight bus leaving at 1 am.
We mentioned this to the staff at our pousada the night before the trip and they immediately asked whether we had booked and purchased the tickets as the process is quite formal.
Of course we hadn’t but it was shortly after 6 pm and the local office of the bus company was supposed to close at 7 pm. We made a dash for it only to find out the office had already closed and the only way to purchase a ticket was to grab a taxi to the nearby town Aracati as the office there might be open until 8:30.
A taxi was arranged and it took us quickly to Aracati. The price of the bus ticket was a steep R$60 and none of us had the cash on us so we tried to pay with a card… but apparently with the wrong card.
This office had chosen Visa as the sole credit card provider and we had all but Visa in our wallets.
There were one or two ATM machines in Aracati that we were told might accept foreign cards so the taxi driver took us there. We thought our luck had changed because another traveller managed to get money out of the ATM but we were once again denied success as the money in the ATM ran out when next person tried to take out money.
Another dash to the second ATM in town and there finally we were able to get our hands on some dosh to pay for the tickets to Natal.
After this roller coaster of emotions I was very pleased to cool down with a few capetas once back in Canoa.
Had I known what the bus trip ahead of us would be like I wouldn’t have celebrated quite yet but let’s leave that story for next time!

One thought on “Canoa Quebrada, Brazil”