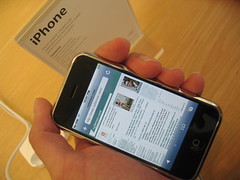 The news is officially out from Steve Jobs’ mouth: the iPhone will be available in the UK from November 9th, 2007 and exclusively with O2 and Carphone Warehouse.
Congratulation to O2 and Carphone Warehouse 😉 for securing the deal.
It would be interesting to know how much O2 paid for this exclusivity and how this exclusivity will pay off with the recent iPhone unlocking and the iPod touch release.
In case you are still deciding whether or not to get the iPhone in the UK I have summarised a few points for you to consider that may help you to make up your mind.
The cost
£269 and a 18 month contract at (minimum) £35 / month.
What unique features does the iPhone have
+ a multi touch user interface
+ visual voicemail
+ Free Wifi at The Cloud hotspots (£12 / month normally)
+ high fashion status
What doesn’t the iPhone have which is found on recent mobile phones
– 3G (the most recent high speed mobile data connection)
– Video recording
– Video calling
– MMS (picture messaging)
– A2DP (bluetooth stereo profile)
– MP3s as ringtone
– 3+ megapixel camera
– voice recording
– voice dialing
– copy and paste
– Macromedia flash support
– USB mass storage device usage
– saving images or files from browser
– bluetooth file transfer
– ability to delete individual text messages
– 3rd party application development (j2me, symbian, .net)
– bluetooth modem
I think you’ll find the iPhone lacking if you are a mobile power user and used to the features listed above.
If on the other hand the priority for you is design, usability and top class support then the iPhone will be a good match.
PS The O2 “unlimited” data plan is limited to “1,500 internet pages per day”. Whatever that means 🙂

for the newly wed Rudolf and Iveta Kaspar.
I was able to get away from our recently enlarged family for three days to attend Rudolf’s and Iveta’s wedding.
The wedding was in Prague and the couple put on a relaxed wedding full of party, laughter and family love.
The day started with a small reception at the couples new apartment in an almost finished apartment block.
There were wires sticking out from the walls in the hallways and the apartment was all empty but for a pair of mattresses and sleeping bags.
This didn’t prevent a great atmosphere and a never ending flow of champagne.
A red Skoda decorated with white flowers was arranged for the bride and a white mini bus was arranged for the groom and the rest of the family.
In such magnificent style did we travel to the busy Old Town Square were the wedding ceremony was to be held at the Old Town town hall.
I have been to the Old Town Square on numerous occasions to marvel at the ancient astronomical clock just like millions of tourist from all around the world. Never have I however been inside the town hall.
The actual ceremony was short and sweet and the couple had chosen a few untraditional songs for the organist: Clocks by Cold Play, Everybody’s changing by Keane and Spomal by Peha.
Apparently the organist had not known how to play the songs initially but managed splendidly once provided the notes.
The square was as busy as ever on this fine Saturday and full of tourists from all around the world. They snapped away merrily at the newly wed couple.
Rudolf and Iveta are for ever recorded in the family travel albums of visitors from China, Italy, Russia, Germany but mainly Japan.
A family feast followed where I had the chance to meet the bride’s family members for the first time.
I can happily report that they turned out to be a bunch of really nice and honest people that never say no to having fun.
The feast lasted longer than planned and it was getting close to the “real” evening party. Luckily I managed to squeeze in 30 minutes of power napping; something that I doubt the newly wed couple had time to do.
There was a great crowd at the evening party and I met up with a few childhood friends I hadn’t seen in years. There were a few surprises like random visitors from Norway and excellent musicians dressed in poncho’s.
More food was arranged in the form of a buffet with traditional Czech delicacies.
After the earlier feast I swore not to eat again for several days but I caved in for a midnight snack of chicken wings, sandwiches, goulash and some more wedding cake.
All in all a fantastic wedding and celebration and a huge privilege that I was able to attend.
Congratulations to the newly wed couple and an apology for the delayed wedding present… it is on the way!