Google Photos was re-launched recently during a slick presentation at Google I/O 2015.
Besides the unlimited storage for 16MP photos and 1080p videos what caught my interest the most was the demo of the face and people search.
The new product was not only able associate photos of the same person, it was also able to do it across a large age span of the person. 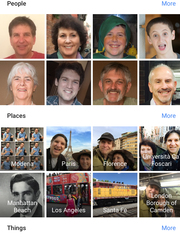 Some reported examples are “it associated photos of my niece starting with her current age of 6 years and all the way back to 3 months old” and “it was able to discern our twin daughters”.
So imagine my disappointment after upgrading to this latest Google Photos version, backing up my entire photo catalog (30,000+ 16MP photos) and not being able to find the face/people search.
I suspected some European or UK privacy laws being the root cause why Google hasn’t enabled it in the UK and a few searches later my suspicion was confirmed.
Since it seemed to be geographically restricted I was curious to see what would happen if I tried the application from another location.
Virtual Private Networks, a.k.a. VPN, are very handy to make your internet traffic to appear from a different location than you are.
All your traffic is tunneled to an exit point of your choosing, for example a data center in New York City. To Google Photos service you then seem to be located in New York City, USA. 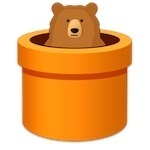 One such easy to use VPN service for android is Tunnelbear but there are many others. Tunnelbear offers 500 MB of free traffic and you don’t need much more than 20MB to get this set-up.
It worked, I got face/people search in my Goole Photos android app and this is how I did it:
In summary you want to delete the Google Photos application data and re-start the application while being connected to the VPN. This will trick Google Photos into believing you are located in US and the feature will be switched on.
Once the feature is switched on you don’t have to re-connect to the VPN; the feature will remain on!
Detailed instructions: delete the data from Google Photos, turn on airplane mode, turn off location services, connect via Tunnelbear, start up Google photos, go through the introductory 4 steps, go into settings and turn on “Group Similar Faces”. Success, you now have your photos organised by many, many different people present in them.
The face categorisation appeared as soon as I connected via VPN. There was no initial time for google to build up a face database for my photos.
This really seems to suggest that all photos added to Google Photos are categorised by face. The search feature is just hidden in certain geographical locations to comply with local laws.
Is this really in the spirit of the law or just cheat? You decide!