The K800i is one of the latest phones from SonyEricsson and it offers almost an overload of features. A 3.2 megapixel auto focus camera, 3G (UMTS) support, highly visible QVGA display and powerful MP3 playback being some of the most prominent ones.
The phone has received a face lift from last year’s K750i. It is noticeably heavier and a shade bulkier due to larger display and a beefier lens cover.
SE must have listened to disappointed users who found the k750i a bit “plasticky”. Several plastic panels have been replaced with discreet brushed steel and the squeaky plastic buttons have been replaced with rubber covered ones.
With the 3G (UMTS) comes services like mobile TV, faster data transfers and video calling. A second lower grade camera (CLI) has been fitted on the front side of the phone to be used during video calls. You can also follow your favourite TV show (Big Brother?) in low quality but it will cost you. 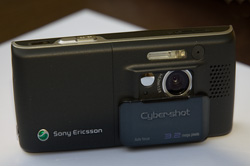 3.2 megapixels allows for even better quality pictures than with the previous 2.0 megapixel model. Further added photo features are Sony BestPic-TM and a proper Xenon flash.
BestPic-TM is a term for automatically taking 8 pictures during a second when the shutter button is pressed down. The user can then choose one or more best pictures to keep from the set.
A Xenon flash is normally used in traditional digital cameras and is much more powerful than the previous LED flash used in current mobile phones. One downside is that the Xenon flash cannot be turned on in continuous mode like the older LED flash. I for one will miss the emergency torch feature the LED flash offered.
Here is an unprocessed sample shot from the K800i 3.2 megapixel camera.
Naturally the phone supports the standard messaging formats like SMS, email, MMS and etc. A new addition is a basic RSS feeder. You can add your favourite RSS feeds and schedule automatic updates. The phone will alert you when there are new entries and show short excerpts.
The built in web browser has been improved and together with 3G speeds the browsing experience is even closer to a standard PC. Despite the browser improvements, I prefer the new Opera Mini which is supported on most j2me phones.

The phone uses the latest Sony memory format Memory Stick Micro (aka M2). If this is your first Sony product you will be pleased with the physical size of the memory; it is the size of a finger nail!
If you however have a few memory stick formats laying around at home you may be annoyed at having to purchase yet another one. The current largest capacity is 1GB and for a brand new format the price is surprisingly affordable (£42).
Vodafone does not supply a M2 memory stick with the phone so if you think you will require more memory than the built-in 62MB make sure to purchase it ahead to avoid disappointment.
Vodafone has yet again branded the phone heavily with their icons, themes and alternative short cuts (majority of them leading online to Vodafone Live!).
It is possible to use an online service to re-brand the phone to original SE settings but I am cautions to do this and maybe risking loosing data connectivity. At least this time Vodafone did not cripple MP3 ring tones capability like they did on the k750i.
One of the easiest ways of transporting contacts to a new phone is via Outlook. Create a new contacts folder in Outlook, set up to sync your phone with that folder and synchronise your old phone. Follow up by connecting your new phone, make sure to select “Outlook overwrites phone” when synchronising and sync the new phone. All your contacts should be preserved.
Update April 2007
I have just discovered the coded memo feature and find it very useful.
It lets you enter multiple codes with a descriptive name and a code field. For example “bank account x” and “1234 1111111”.
The information is protected by a 4 digit password. If the wrong password is entered, all the codes are presented scrambled.
This means that a potential information thief can never be sure whether he/she guessed the correct 4 digit pin.
One reservation would be that there is no information on what kind of algorithm is used for the protection nor how well the code memo feature would withstand a hardware attack.