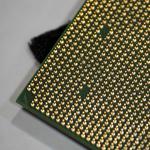 At first I was grandiosely excited about the shiny new dual core AMD 64 X2 4800 processor I was about to upgrade my system with. Then I was bombastically disappointed when the computer did not start up after I had fitted the new processor on the motherboard.
After checking that all kinds of sockets, cables, wires and buttons were in place I removed the CPU to see if it had possibly been inserted inadequately.
To my horror I noticed that one of the minisculus processor pins had been bent all the way down to the surface of the processor.
In my 10 years of building custom computers and therefore fitting aplenty of CPUs, this was the first time something had gone as horribly wrong.
I accredit it to the fact that it was late in the night, I had had a double (single malt) scotch and I was too lazy to move the PC to a flat surface so I was fitting the CPU in a 45% angle.
Not giving up instantly, I tried straightening the pin with a tiny screwdriver but it snapped like only a dry stick could do.
For a brief moment I suspected that maybe the CPU had come like this from the shop but realised that no warranty return was possible after having further mutilated the CPU myself.
I decided to cut my losses and put the CPU up for auction on eBay clearly stating that it was not working. Then I proceeded to ordering a second AMD 64 X2 4800 from the same shop.
The following day I started looking into ways of repairing a broken pin on a processor. Just out of curiosity because a) the replacement processor was on the way and b) I didn’t really think it was possible.
Almighty Google came up with a few possible solutions:

Only the last suggestion sounded like any fun so off I went to the AMD website for detailed specifications on the socket 939.
Figuring out the name of the missing pin was a bit confusing due to the orientation of the CPU but at last I had a position; AF-12 aka [STRAP_HI_AF12].
Looking up the functionality of that position I struck gold.
The specification said “Not used by the system” for that location. Two other locations said the same thing so this seemed to be a 0.5% (1 in 200) chance.
So I attempted a second, careful, insertion of the processor and the PC booted up like a champ. I ran a few tests and benchmarks and all indicated that the processor was working just fine.
Then there was the dilemma of the replacement processor being on the way and the auction stating non-functional processor whereas it was now seemingly fully working.
Luckily enough the shop had a “7 day cooling off” period within which you could return items without any hassle (still waiting for the refund though).
The auction was won by an Italian buyer who insisted that I tested the CPU before he would pay.
It did not matter how many times I wrote in poor Italian that the auction specifically said the item was not working so I could not give any guarantees.
I guess it worked out for the best that we decided not to trade since the handicapped CPU is now running my PC and doing well. I am getting quite attached to it actually.
So the moral of the story is twofold:
Don’t be a meat head when inserting a new processor and if things go wrong, don’t despair until you have Googled it!