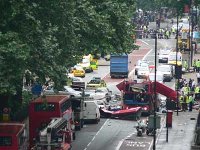 Around 9am today (Thursday) several London underground trains and busses had exploded. All of London underground network is currently suspended and people are being evacuated.
Initially the incidents were being reported as “power surges” on the underground. After several buses had exploded as well it was clear that it was actually bombs that had exploded.
Currently (11am) there have been a few (2) fatal casualties.
No information regarding who is responsible for the attacks as of yet.
I am fine and so is our family. I have been in touch with several close friends who are all fine as well but I am very worried that not all have been so lucky.
Update 3.30pm
Currently there are more than 33 fatalities confirmed. More than 300 people have been treated.
Other sources
Real time Wiki
BBC Timeline
Sky News