You may or may not have noticed that local councils have a new weapon in their money collecting arsenal: Moving Traffic Enforcement.
Under the scheme, local councils can fine motorists that obey certain basic road signs if they catch the motorists on camera.
Disobeying road signs like banned right turns, one-way streets, no-entry, no u-turn and box junctions are some of the contraventions that can result in a Penalty Charge Notice (PCN).
The main reason behind the new scheme is said to be to lower traffic accidents.
Call me cynical but it seems to be yet another way of extracting money from the already tax paying population and I see parallels with congestion charging and parking fines.
The purpose of the Congestion Charge is said to be to reduce congestion in the capital. Why is it then not implemented in the most congested areas but instead in central areas often crippling local business?
A large percentage of the income is due to penalty fees. When a private company introduced a way to minimise on forgotten Congestion Charge payments they were swiftly stamped out.
Parking fines are said to reduce illegal parking and improve the flow of traffic… but in the media there are frequent stories about corrupt parking attendants, performance bonuses based on tickets issued and jokingly easy job application tests.
It is with these bitter experiences that I view the latest Moving Traffic Enforcement. I notice that the appeal process has been altered, greatly reducing the alternatives for a driver to have his say. 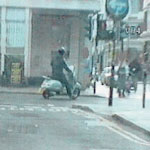 I was recently fined for a right turn. The turn is on my daily way to work and I have been doing it for a long time.
Due to a delay between being caught on CCTV and receiving a penalty charge notice in the mail, I incurred the same fine 5 times.
I had previously successfully appealed a parking ticket but it was a very long process and I did not have the strength to go through all the paper work again.
A search for “moving traffic enforcement” and file types of pdf, doc and xls brings up several internal documents. They discuss the expected moving traffic enforcement monetary performance and on how to lower the amount of appeals because they are consuming resources.
Central London has a very large amount of CCTVs installed. You can literally see one or two cameras on every street corner.
Camden council is up front about the location of CCTVs used to monitor the population but other councils are conveniently quite about it. Does the Human Rights Act say anything about right to privacy?
As long as the CCTV cameras help to increase security and reduce crime I have been willing to accept the price of being monitored. Now the cameras are being used to police the population and dish out traffic fines.
So next time you are about to fart in public, think twice. You are being watched, recorded and registered. Everywhere and always.