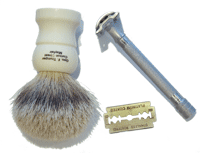 Last months announcement of a five blade razor prompted me to write about a much better alternative. A shave that is cheaper, closer and with less risk for razor burns or ingrown hair: the old fashioned wet shaving.
I used to be the ideal mass consumer. My deodorant, shaving cream and after shave all smelled the same and I was happily buying into the latest razor blade on the market. I could not resist names like ‘Turbo’, ‘Speed’ and ‘Mega’; especially when put together.
This meant that I had to buy a new razor every 6 months. Of course that the cartridges for the old razor were not compatible but I just assumed that this was the price I had to pay to be using the latest and the best.
Boy was I wrong. After reading an article about old fashioned wet shaving and trying it out, I have been converted. The old bi-daily scraping has been replaced with daily wet shaving. If you are suffering from razor burns and/or ingrown hair, you have to give it a try.
There are three main components in a gratifying shave: a badger brush, a double edged safety razor and high quality shaving cream.
The badger brush will bring the most important change. It lifts up your beard and massages the skin to make it softer by using the brush in a circular motion
A natural badger brush traps a large amount of water which is then transferred to your face. Put some shaving cream in your palm and lather it up by making a circular motion with the brush.
Authentic badger brushes are quite costly. Go for the smallest size you can afford. Just make sure it’s badger.
Traditional shaving soap is very rich and enables the blade to slide easily across your skin. It is made from natural ingredients which means you will not get it in ‘Turbo Mint’ but instead in coconut, violet or traditional sandal wood. Expect to pay around £13.50 for a large tub that will last more than 6 months.
The safety razor is a bit tricky to start with. You will not be able to shave with the famous ear-to-ear stroke seen in commercials. Instead you will be using many small and light strokes. Since there is only one blade the shaving angle is important but does not take long to get used to.
Double edged razor blades are very affordable. A pack of 10 best quality blades is £2.50 which means you can change them more often than those more-expensive-than-gold cartridges. Each blade has two edges so it’s almost like a two blade cartridge. By having two edges you don’t have to rinse the razor as often. Purely genious!
Don’t splash any alcohol based products on your newly shaved skin. It has just been exfoliated by the shave and is very sensitive. Instead use a after shave moisturiseror or even better some Skin Food. It moisturizes the skin (non-greasy) and makes it amazingly elastic.
Shopping list:
—————-
Shaving brush – badger: £60 ($106)
Shaving cream: £13.50 ($24)
Safety razor: £25 + £2.50 ($48)
Skin food: £10 ($17)
I get my gear from the traditional English Geo. F. Trumper. They even have an online shop.
Hopefully you have a barber shop not too far away from you too.
P.S: Here is The Onion’s comment on a five blade razor.