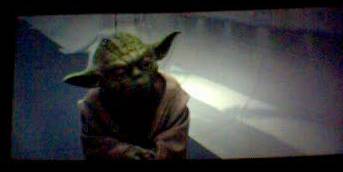 So it was the 00:10 performance, probably the first public viewing of Star Wars III: Revenge of the Sith. The official release date in the UK was Thursday, 19th and the ten past midnight just about satisfied that.
The general manager of the cinema held a little speech to the excited Star Wars geeks fans. He pronounced that he had seen the flick couple of hours earlier and that it really was “all that fcuking amazing”. We all thought good for you but let us watch the freaking movie so we can say the same.
Breathtaking start. Could possibly be the best action sequence of any of the six episodes. I was amazed at how much detail there was in each scene. Shows how much CG (computer generated graphics) has advanced since the first episode in 1999.
This was the part where the pretty boy (my female friends have told me) Anakin Skywalker would become Darth Vader. While that is common knowledge, we were all psyched to see how it would occur. This was the highlight of the movie, for me at least so it was good to see that Anakin’s transition to the dark side was a bit hasten but very enjoyable.
What will the future bring? It would be truly awesome to see the original three episodes (4, 5 and 6) remade but that may be too much to ask for. I have heard rumours that episodes 1-3 will be made in 3D version in the near future. There will also be a TV-show and various live performances (think amusement parks).
Regarding the episodes 7-9, George Lucas has once said that Star Wars was a “trilogy of trilogies” but more recently he has made it clear that episodes VII, IIX and IX will not be realised. Why is then that the whole Industrial Light & Magic team had to sign NDAs about the episodes 7-9 [TheForce.net] and that the British actor Peter Mayhew (plays Chewbacca) said that “his contract also stipulates that he’d be required to appear in Episodes 7, 8 and 9” [hotdogmagazine.com]?
Times seen: 1 2 3