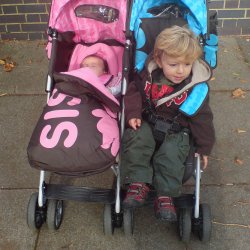 We had travelled many a times with one child but this was the first time travelling with two little ones and I was a bit apprehensive.
On our departure London was as rainy as ever and we were in heavy Friday evening traffic on route to the airport. Oh boy was I looking forward to the Summer in Brazil.
It took all of 6 large suitcases, 4 carry-ons, one car seat and one foldable buggy to fit all the necessities. Needless to say the manoeuvring of it all was worthy a circus stunt.
The suitcases were mostly filled with Christmas presents and baby clothes and the carry-ons were mostly filled with baby food, nappies, creams, toys, bits and bops.
Me and my wife had to do with a few t-shirts and some swimming wear.
To my huge surprise and relief the little ones are both at the right age of sleeping most of the night so once they settled in (the little one in a cot, the bigger one in his own chair) they were fine.
Well, besides the occasional sliding down the chair and sleeping like a bum on the cabin floor.
This was a huge change compared to 12 months ago when every 1.5 hours of sleep were followed by 1 hour of walking around the plane and saying hello to everybody.
The trip would have been fairly painless but for me accidentally grabbing the wrong bag from the baggage belt. To my defence the bag was a black Nike sports bag with an orange ribbon… just like ours.
I went back to the airport shortly after discovering the mistake. The bag was located fairly quickly and a friend went to the lost baggage office to pick it up (I was having lunch).
There were a few people picking up lost luggage and one person with 7 bags (!) being interrogated by the customs.
The person was told to pay an import duty of US$ 6,000 and since the import duty is 100% in Brazil he must have been trying to get in US$ 6,000 worth of iPhones and PS3s. The man broke down in tears (did somebody tell him that the iPhone is not 3G?).
I failed to mentioned to my friend the combination of the lock and what was inside the bag so he had to be creative when quizzed about the contents.
He guessed correctly that there were wrapped Christmas presents inside the bag and prayed open the zipper without the staff noticing and thus was allowed to take the bag with him.
The airline staff always have to inquire about the bag contents because all lost or forgotten bags are carried by the airline staff through customs without any inspection. I guess it would be too easy to “forget” a bag full of illegal stuff and pick it up rick free on the other side.
This was the easy part of our trip; the real adventure started when I went to North East Brazil to meet up with friends on their honeymoon but more about that next time.

So we were supposed to be going to the Txai resort, Bahia, Brazil. The flight Sao Paulo to Illeus was at 7 am which meant we had to go up at 4:30.
Now this would normally not have been too bad but this time it was the morning after my brother in law’s wedding. Of course there was a big Brazilian party to mark the occasion and of course did I have to force my self to go to bed by midnight.
To add to the already nicely stressed schedule, a project for work was due and this was possibly the last time with decent Internet access to send of a couple of MB worth of application design. It got done, just. Between midnight and two in the morning.
After just 3 hours of sleep but very psyched to be of to a sunny paradise we got of to the airport Guarulhos. Getting another ride from my wife’s cousin who by now I know is an excellent driver (fast, safe, breaking all possible traffic rules) in the Sao Paulo traffic.
At the airport we discovered to our horror that Guarulhos was the wrong airport. TAM, the airline that was to service us, had changed the airport of departure to Congonhas just one day before the flight. They had notified as many passengers as possible but we booked through an agent and he did not get through to us.
It was 6:30 and the flight was scheduled for 7 am. The trip between Guarulhos and Congonhas is about 1 hour we were told.
Close to tears, we gave it a shot to try to speed to the correct airport. The TAM staff were at least nice enough to warn the crew at the other airport that we were making a dash for it.
18 minutes later our tires were screeching outside the correct airport. A few ladies at the check in desk notified us professionally that there was no way we could make it on the flight but a senior staff jumped swiftly over the counter and commanded us to run after him.
#PAGEBREAK#
10 minutes later after an express security check, a personal lift to the aircraft and re-lowering the plane staircase we were on board. Sweaty but on board. The plane took of 7:01, just one minute late. (BA, take some pointers please) 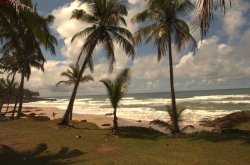 So here we are. Writing you from a sunny Bahia. They even have some sort of Internet connection here! (I had to high-jack a LAN cable and an IP address but it works)